Military expert Professor Michael Klare talks military budget, the dangers inherent in our contentious relationship with Iran, and the shift in U.S. military planning away from stateless actors to China, Russia, and Iran. 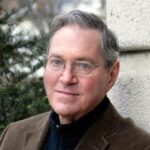 Michael Klare is the author of fourteen books, including: “Resource Wars; Blood and Oil;” “Rising Powers, Shrinking Planet;” and “The Race for What’s Left.” (He is the Five College Professor of Peace and World Security, and director of the Five College Program in Peace and World Security Studies at Hampshire College. Mr. Klare is also the defense correspondent for The Nation.

“We could be at a point where Trump will be coerced by Bolton and Pompeo and Netanyahu into taking military action against Iran. When that happens, we don’t know what will happen next. But, it’s likely to create a metastasizing series of crises throughout the Middle East.” Michael Klare, director of the Five College Program in Peace and World Security Studies