The End of Ice

Ralph spends the whole hour with independent journalist, Dahr Jamail, author of “The End of Ice,” his first person report on the front lines of the climate crisis. 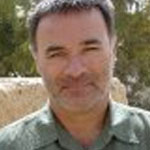 n late 2003, award-winning journalist, Dahr Jamail, went to the Middle East to report on the Iraq War, where he spent more than a year as one of only a few independent US journalists in the country. Mr. Jamail has also written extensively on veterans’ resistance against US foreign policy. He is now focusing on climate disruption and the environment. His book on that topic is entitled, The End of Ice.

“So much of what we talk about is so dire and so extreme and so scary and also disheartening that I quote Vaclav Havel, the Czech dissident writer and statesman. And he reminds us that as he said, ‘Hope is not the conviction that something will turn out well but the certainty that something is worth doing no matter how it turns out.” And that’s where I get into this moral obligation that no matter how dire things look, that we are absolutely morally obliged to do everything we can in our power to try to make this better.”  Dahr Jamail, author of “The End of Ice”